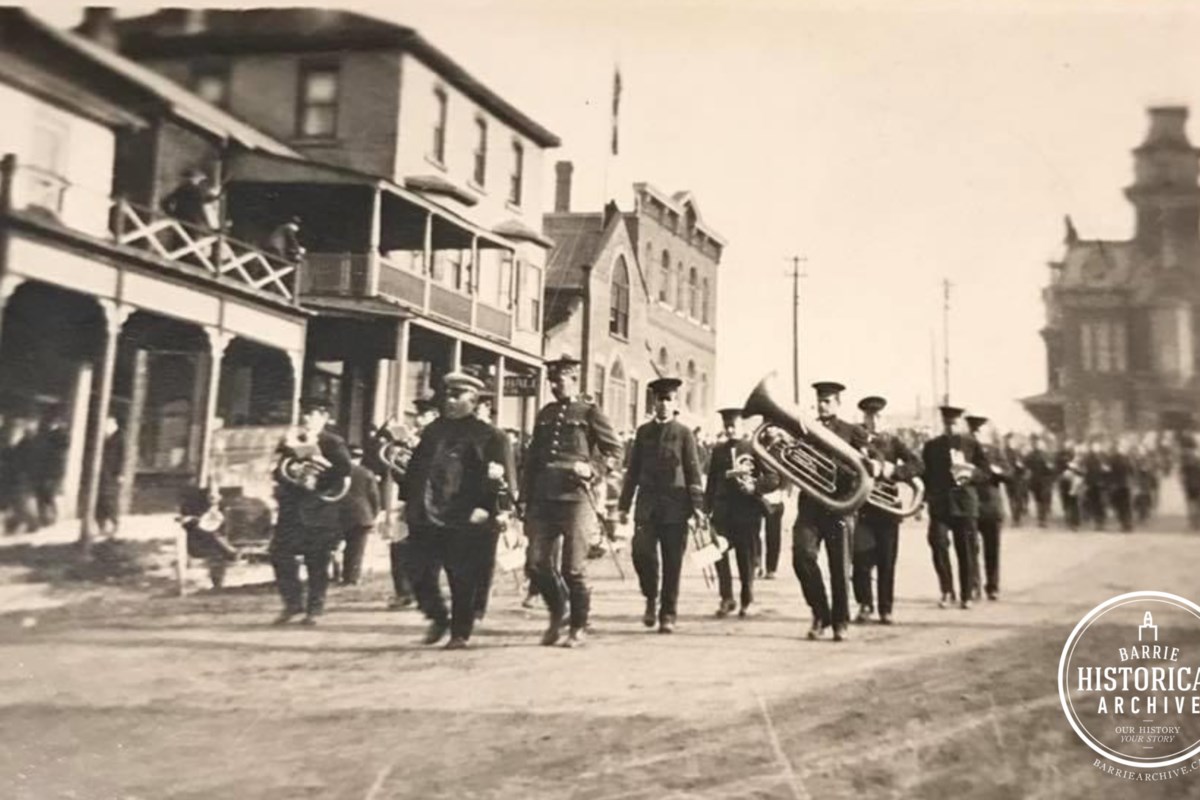 This ongoing series from Barrie Historical Archives Curator Deb Exel shows old photos from the collection and one from today, along with the story behind them.

Last week we talked about Duncan John Murchison and his gorgeous Sunnidale Road home, Woodlawn. He was able to afford to build such an impressive estate thanks to the success of his dry goods business.

Murchison, born in Etobicoke in 1833, partnered with Thomas C. Watkins to form Watkins and Murchison, a wholesale company. Their business then grew into The Right House, a successful dry goods house in Hamilton, which continued as a large store until the 1980s.

When Murchison arrived in Barrie in 1868, he purchased property on Mulcaster Street and quickly built his shop.

The lower floors of what is now 28-32 Mulcaster Street would have been Murchison’s store. In 1885, Murchison’s son Duncan Charles occupied the top floor. DC was a partner of Edward J. Hearn and their company, Hearn and Murchison, Barristers, Solicitors, Conveyancers and Money to Loan Office, was located above DJ Murchison’s store on Market Street (now called Mulcaster), with a branch on Potter’s Block in Tottenham.

In the summer of 1889, Duncan Charles Murchison married Minnie Elvira Ball, the builder’s only daughter, George ball, during a brilliantly fashionable ceremony in Collier Street Methodist Church. The interest in this marriage was such, given the importance and social status of the two families, that an hour before the service the building was packed with barely any standing space – the body of the church and the galleries filled with “Barrie’s best citizens and the crème de la crème of their society.”

Needless to say the church was lavishly decorated with rare and fragrant flowers and the bride, attendants, family and guests were all beautifully decorated. The bride and groom walked out of the church, walking on a carpet to cars waiting to take them to the Ball home on John Street (now Maple Avenue) where 100 guests enjoyed an elegant and lavish reception.

In June 1900 Duncan Charles was a partner in the McCarthy, Boys and Murchison law firm, operating from offices in the McCarthy Block on Dunlop Street.

The building on Mulcaster Street remained in the Murchison family until Duncan Sr.’s death in 1900.

By about 1904 the property appeared to have two sections: the three-story building, or north section, had a grocery store on one side and a shoe store on the side closest to Collier Street, in 1907. The south section (now 24-26 Mulcaster Street) would have had a grocery store in the northern half and an engine repair shop in the southern half of the building.

This structure had a second floor balcony at the same time and one unusual fireplace. The changes to the bay window and the ground floor of the south building likely occurred when it was converted into apartments in the 1940s.

Today, the old Murchison store is part of a small stretch of Mulcaster, between Collier and Dunlop streets, which has retained all of its original buildings, except for the old fire station and the Victoria Hotel.

Take a new train to the plane? Group pushing for the Atlantic City Airport train station.