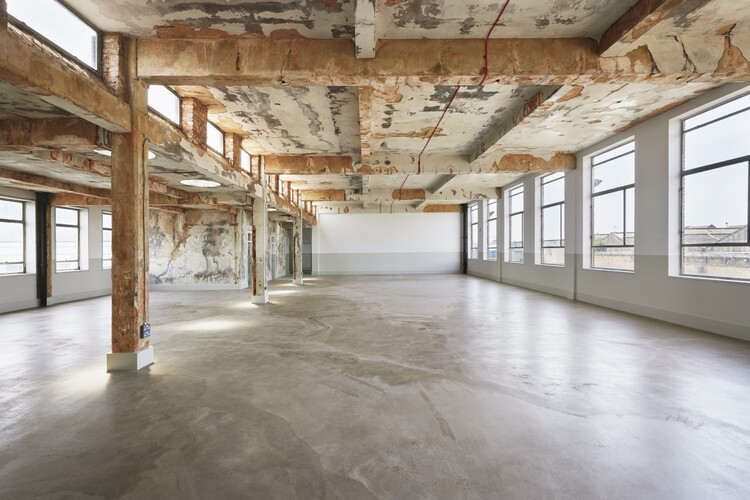 Text description provided by the architects. The Beams, Center for New Culture. Broadwick Live reinvents an industrial building in London’s Royal Docks into a testing ground for art in all its forms. Broadwick Live – the group behind some of the UK’s most ambitious and acclaimed venues, events and creative development projects – has unveiled The Beams, Center for New Culture, in the heart of the Royal Docks. Housed in a warehouse that used to be part of the Tate & Lyle factory complex, The Beams is spread over an incredible 55,000 square feet of indoor and outdoor space that will serve as a test bed for culture in all its forms.

The Beams is the latest transformational project from Broadwick Live, which builds and operates some of the world’s most exciting venue and entertainment brands. The group has a proven track record of bringing opportunity and creativity to unlikely places, preserving and reimagining disused industrial spaces, in much-loved venues with loyal followings – Printworks, Depot Mayfield and The Drumsheds are examples. eminent. For the beams, Broadwick Live’s internal architecture team led by Luke Huxham, Director of Development and Place, takes a lightweight approach to the industrial building complex.

The original architectural features and aesthetics of the industrial warehouse are preserved, including retaining the original terrazzo surfaces as well as reclaiming signature elements such as a magnificent stairwell and the distinctive shape of the sawtooth roof of the main industrial space. The original crystal windows, large-scale glazing and circular skylights have also been enhanced and preserved, allowing for an abundance of natural light, which inspired the name of the venue.

As with Printworks and other sites in the Broadwick Live portfolio, The Beams will operate under a hybrid multi-use model. During the week, it will provide a versatile space for modern industrial uses such as set construction, film and art production, photo shoots, branding events, exhibitions and fashion shows.

Guests will be welcomed on weekends for the musical series and cultural events. The Beams, which is currently in planning, is the result of Broadwick Live’s close collaboration with Newham Council, The Royal Docks & Projekt, who strive to ensure The Beams delivers social value, economic impact and cultural.

A curated showcase of emerging and established artists – Irish and international – all filmed in a Galway location known for supporting rising stars, will be available on the TG4 Player this month. CUMASC: Seisiúin sa Black Gate is a new twelve-part musical series that blends beautiful concert film with intimate observational documentary and interviews. […]

The Vault Cultural Collective (VCC) spoke to Strathmore Town Council about their recent successes working with arts and culture organizations to create a space for artists to thrive in Strathmore. Carolyn Steeves, the president of the VCC, spoke about some of the ways the vault has been challenged and improved since its founding 22 months […]

Our 2021 review has reached the summer months and the announcement of the opening of several cultural attractions as part of a £ 260million mixed-use development in Birmingham. New plans were unveiled in July for a Birmingham Museum of Youth Culture and Music Archives after agreements were made with the developers of a major project […]