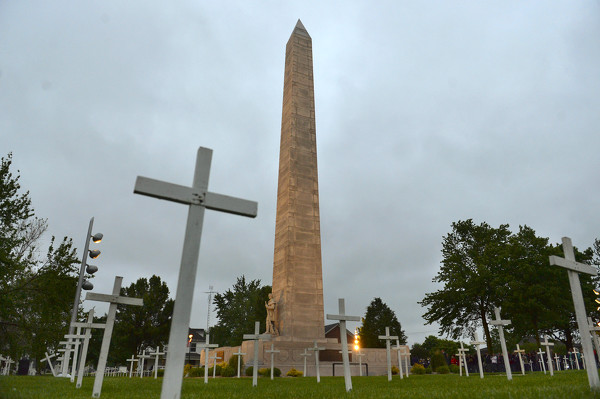 FORT RECOVERY – With the push of a button, Lester Huelskamp, ​​the oldest living veteran among the village’s veteran organizations, illuminated the Fort Recovery monument in brilliant light on Friday night.

Due to the rain, traditional ceremonies hosted by members of the American Legion and VFW have been moved inside Fort Recovery High School.

Afterwards, the veterans groups drove crowds of people across the street to Monument Park. Approximately 1,000 white crosses depicting soldiers killed in the battles of 1791 and 1794 which paved the way for the westward expansion of a nascent country, surrounded the 101-foot-high obelisk at Monument Park, inspiring moments of thought and appreciation for all veterans who served their country in times of need.

Huelskamp, ​​98, inaugurated the first lighting of the monument, an event that has been brewing for 10 years. A series of lamps surrounding the monument illuminated the impressive structure. After the switch was activated, the Fort Recovery High School group, under the direction of Reid Knuth, launched the national anthem and Reverend Ned Brown offered the blessing. This was followed by a 21-shot salute and tap play.

The patrons of the museum had undertaken to install lighting to illuminate the monument, the cornerstone of the historic heritage of the village. A fundraising campaign was launched thanks to a generous donation from the John and Mary Ann Wendel family. Museum patrons, various organizations and others also contributed to the project, according to museum director Nancy Knapke.

Garmann / Miller made engineering, electrical and equipment plans for the lighting project that were approved by the monument’s owner Ohio History Connection, Knapke told the newspaper.

“Garmann / Miller agreed to do it without charging us for it, and we were really proud that Ryan Heitkamp and Chad Schroer, both local boys who work for this company, were able to do the majority of the work for us. , ” she said.

The towering monument pays homage to the men, women and children who died in the Battle of Wabash, also known as St. Clair’s Defeat in 1791, and the Battle of Fort Recovery in 1794.

Composed of gray North Carolina granite, the monument was authorized by President William Howard Taft and built by the Van Amringe Granite Company of Boston, Massachusetts, in late 1912 before being officially opened in 1913. It was modeled on the Washington Monument. US General Arthur St. Clair’s historic campaign in 1791 in northwest Ohio to gain control of the area between the Ohio River and the Great Lakes was unsuccessful and one of the nation’s worst military fiascoes. .

The tide turned for the Americans in 1794 with the Battle of Fort Recovery, when the US military defeated the largest Native American force ever assembled. As well as being one of the few times Native Americans attacked a fort, the battle led to the Treaty of Greenville in 1795. 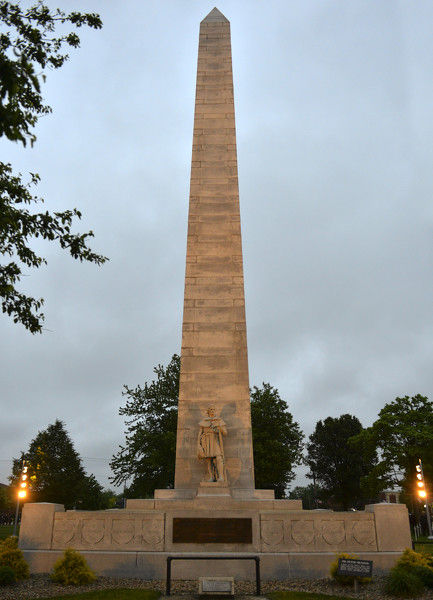