(ECNS)– The Museum of Asian Art in San Francisco is dedicated to spreading Asian culture and art, with a collection of nearly 20,000 Asian cultural relics spanning 6,000 years. The Chinese collection is the most abundant. How does the museum act as a bridge in intercultural communication? Xu Jie (Jay Xu), director and CEO of the museum, said in a recent exclusive interview with China News Service’s “East-West Quest” that the key to freeing culture from political boundaries is finding the greatest common divisor. . Museums can transcend politics and emphasize communication between people and between cultures.

Xu graduated in 1983 and began his career as a curator secretary at the Shanghai Museum. Seven years later, he chose to continue his studies in the United States at Princeton University. After graduation, he worked at the Seattle Art Museum and the Chicago Art Museum. In 2008, Xu joined the Asian Art Museum in San Francisco, becoming the first Chinese curator at a major American museum. In 2015, he was elected an Academician of the American Academy of Humanities.

China News Service：Since you have experience working in Eastern and Western museums, what differences impressed you the most when you first entered a Western museum?

Xu Jie: I officially started working for American museums in 1996 as a curator in the Chinese art department of the Seattle Art Museum. At that time, what impressed me the most was that China and the United States were different in their management. Chinese museums work as a team, while American museums focus on individuals. In comprehensive museums in the United States, it is often impossible for each cultural category to have many employees; a person has to undertake many aspects of the job. This mechanism has great advantages. If you are alone, you will have many opportunities to unleash your talents. But the challenge is that no one can do everything, so they have to cooperate with Chinese experts and Chinese art experts outside the museum.

China News Service：As a Chinese-American, what advantages do you have and what challenges have you encountered when working in American museums?

Xu Jie: My identity gives me great advantages when participating in cooperation with China. The first reason is that I have worked in China and share many common views with my Chinese colleagues on language, way of thinking, knowledge and morality. In addition, I worked as a secretary to the museum director at the Shanghai Museum for seven years. This job gave me a great opportunity to learn in depth how to run a museum, which helped me a lot when I later worked for museums in the United States.

China News Service: Western museums generally prefer to display Chinese historical relics in all Chinese exhibitions, always introducing visitors to “old and ancient China.” What should they do to present a modern and authentic China to visitors?

Xu Jie: The Asian Art Museum of San Francisco will always protect and promote traditional art and embrace the future. We pay attention to both traditional art and modern art. We exhibit modern art and also display old art from a contemporary perspective. The emphasis on tradition is not at all contradictory with modernization.

Cultural relic at the Museum of Asian Art in San Francisco

China News Service: What should museums do to properly manage the relationship between “elitism” and “popular culture”?

Xu Jie: We live in an era of diversity instead of duality. Elitism is not at all at odds with popular culture. I require my team to conduct our work based on top-notch academic studies, and we are quite willing to work with academics in the ivory tower. In the meantime, most visitors are people from all walks of life, so we need to present them with the most in-depth academic studies in an easy-to-understand and interesting way.

For example, “Rhinoceros Shaped Ritual Vessel” is the most popular exhibit in our museum and our mascot as well. We launched an online vote to find a nickname for this relic, and we even found a Spanish name for it: Reina, which means “queen”. As an expert in bronzes, I know this ritual object well, but I have not yet determined its sex because the former craftsman did not add any sexual trait to it. The vote shows that the public believes that this is a woman and even a noble queen. And it’s a great story.

China News Service: How can we tell the story of Asia, especially China, in the Western context?

Xu Jie: The key to telling the story of Asian and Chinese culture in the Western context is ‘communication’ and ‘connection’. Be sure to find an entry point familiar to Western audiences and lead them into unfamiliar cultures.

The first point is to connect the old with the modern.

The second is to connect Asia to the world.

A few years ago, we organized an exhibition called “China in the middle of the world”, with the theme of world maps. Among the cards presented to the public, two are the “Kunyu Wangu Quantu” of the late Ming dynasty and the “Kunyu Quantu” of the early Qing dynasty. Both maps were customized for Chinese emperors by Western missionaries working with Chinese technicians, placing China at the center of the world. Maps are an important way for people to understand the world, and with them as a medium, this exhibition reflected China’s position in the world as well as the exchanges between China and other countries at that time.

And the third is to connect art to life.

This link is particularly important. All of our exhibits must have something to do with American life today, and in 2013 the Asian Art Museum in San Francisco held an exhibit on Terracotta Warriors and Horses under the theme of “the ‘immortality”. We suggested all visitors to take the view of “immortality” when visiting. In fact, everyone is capable of immortality. For example, if a teacher cultivated good students, a community volunteer helped elderly people, or a scientist proposed an important scientific theory, they have achieved immortality. And this quest is universal. Inspired by the theme of “immortality”, audiences will understand why Qin Shi Huang created so many terracotta warriors and horses and left behind so many wonderful relics.

China Information Service: What experiences can Chinese and Western museum professionals learn from each other?

Xu Jie: In the United States, for example, each museum has autonomy over its development, and the country’s museums have distinct characteristics. This is a strength that Chinese museums can learn from. This is especially true given the rapid development of Chinese museums over the past 20 years. The architecture of museums across China is not at all the same, but most museums are still quite similar in the means, forms and even content of their exhibits, with the exception of a few large museums. Each region still has a lot of room for improvement to further highlight its uniqueness.

One of the main dilemmas for Western museums is operation, which is particularly acute after the outbreak of the pandemic. Their primary source of funding is not admission fees, but donations from individuals, associations, and corporations, which places considerable fundraising pressure on curators. In contrast, the Chinese government provides museums with significant support in terms of operating funds. I hope the US government can learn from this and offer more support for cultural efforts.

China Information Service: There are differences between different countries, nationalities and cultures, so what is the role of museums in intercultural exchange?

Xu Jie: People have different interests and hobbies, even those from the same cultural background. Therefore, there are greater differences between different cultures. If the political systems of two countries are also different, then the differences will be greater. How to achieve cultural exchanges that go beyond the limits of politics? We have to find the greatest common interest between countries. Transcending the political level, museums emphasize interpersonal and intercultural communication. 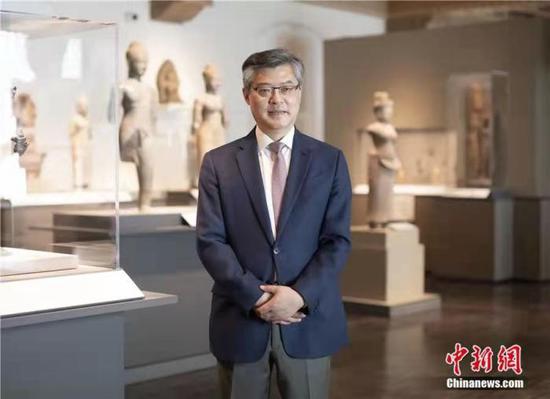 How important are resumes when assessing a candidate’s cultural fit?

Determining whether someone is suitable for a position with a company is more than just whether they tick all the boxes in terms of education, training, and previous experience. Modern companies are increasingly aware of the implications of organizational culture as part of the recruitment process. This is obviously something that can be thoroughly assessed […]

Nusseibeh stressed the importance of stepping up efforts to realize the university’s mission of making a positive contribution to the advancement of the UAE by providing undergraduate and graduate education in line with international standards. The council also discussed several strategic projects undertaken in accordance with the “principles of 50” – ten principles that will […]

Eddie Steele is finally satisfied with the management of the Edmonton Elks. The retired defensive lineman turned analyst made headlines last season for his criticism of former general manager Brock Sunderland, which resulted in his dismissal from team broadcaster 630CHED. Now Sunderland are gone and Steele’s former manager Chris Jones is back in town, leaving […]