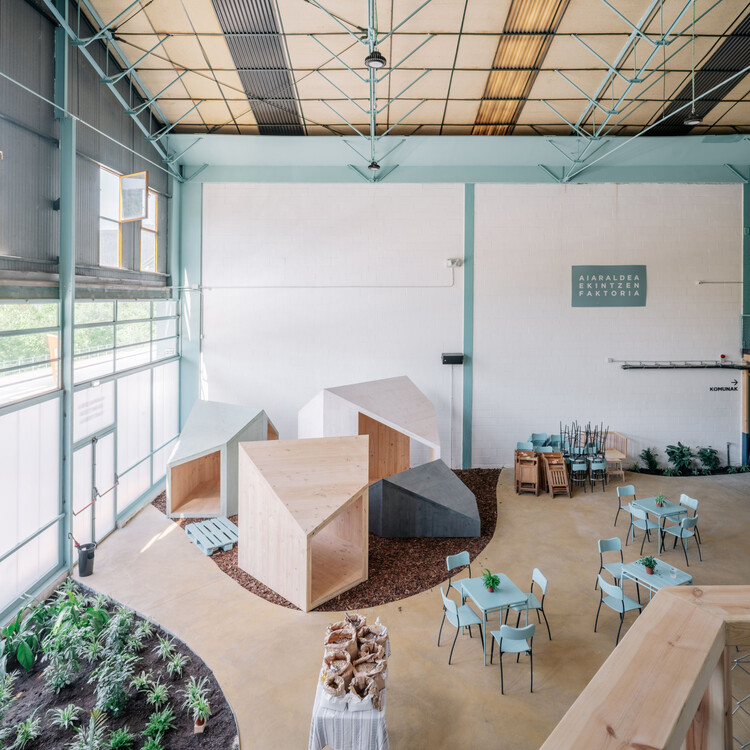 Aiaraldea is a non-profit consumption and social initiative cooperative, created in the Basque Country region of the same name, to provide support and assistance services through cultural and educational activities in the Basque language -euskara- , through the promotion and management of goods and services produced in Basque, both for its members and for other citizens, associations, companies and institutions, in the areas of leisure, communication, culture, education, linguistic normalization, food sovereignty, feminism, social economy and regional community development, insofar as the market does not meet these social needs. For the development of these objectives, it is essential to create a headquarters that houses the offices of the cooperative, those of the media and the service company, and which also serves as a meeting space for the members and for the realization of the social, cultural and educational activities related to the association. So, after a long and complicated process of developing a viable program, finding a space that could be transformed into a headquarters and exploring funding and crowdfunding avenues, Aiaraldea Ekintzen Faktoria -Aiaraldea Action Factory- sees the day. An ambitious project which must integrate a large and demanding program, with multiple and contrasting uses, in a space of high spatial and environmental quality. The project of an adaptable and versatile space must include all the pre-design work necessary for its long-term realization, even if the construction will be carried out in different phases depending on the resources and needs of each period. In addition, due to economic constraints, much of the work must be carried out through community work or auzolan, a Basque term used to define free neighborhood work usually carried out for the benefit of the village or a community, and occasionally to help a person or a family.

The project shares with others of the same kind the same logic as a matryoshka, in the literal physical sense, where one set of buildings fits into another, and in the social sense, in which many social relationships and exchanges take place. in a more general context. , a new framework for the relationship between people. In addition, Faktoria must be a space for the promotion of the values ​​of the cooperative, their physical embodiment, and therefore it is made with sustainable materials and construction solutions, chosen to favor interactions between the different spaces and between their users. Faktoria must be as sustainable as possible, both in its construction and in its subsequent use, and relies on criteria of adaptability and reversibility to allow total or partial reconfiguration of the space. The proposal, beyond responding to the agenda of needs put forward by the Aiaraldea cooperative, should act as a catalyst to improve, accelerate and enrich the dynamic relationships that must be created in this space. Intensify relations between users and at the same time create an environment or a scenario — city and place — where these relations develop. The image of the village is enriched by the idea of ​​the factory, where the actions and socio-cultural activities of the collective are made.

The proposal reproduces a small urban structure, a village, with its public and private spaces, its open and closed spaces, its agora or squares, its green spaces, etc. The growth of this village is regulated in some parts, and more organic in others, as it unfolds around a meeting space, overlapping the spaces and adapting it to different uses at different times. As in a city over time, it will be possible to enlarge its surfaces, which will extend to the surrounding agglomeration, dematerializing the enclosure of its continent, the pavilion itself, leading its interior life outwards and colonizing its surroundings.

The aforementioned matryoshka strategy, which consists of introducing smaller buildings within the existing building, offers many advantages: It allows the spatiality of the warehouse to be maintained without conditioning the entire volume, saving on heating and insulation. It allows the readability of the space very quickly, favoring the intuitive understanding and the localization of the different interior spaces and uses. Moreover, the architectural advantages are clear, creating an attractive and rich space, similar to the organic ensemble of an old village, with its small squares, small neighborhoods and green areas. The starting point for developing this strategy is the creation of a work module with simple geometry that volumetrically takes the form of a modest cabin. By repeating and grouping these modules or cabins, adapted to the different spatial needs required for each user by subtle changes of scale, the objectives of the vast program are achieved and at the same time the volumetric and formal richness that it requires is ensured. . Whether workspaces, meeting places, children’s games, stage boxes, taverns, they are used both indoors and outdoors, in accordance with the topography built of this new village.

Light timber frame modules benefit from standardization and prefabrication, with the advantages of a repeatable modular system, which at the same time, can be easily built in a non-specialized way. Depending on construction and finishing requirements, they form opaque or translucent enclosures, with different degrees of insulation and barriers depending on hygrothermal and acoustic needs. A light and clean construction system of small well-distributed loads is used which avoids costly foundations; and which allows the thermo-acoustic conditioning of the rooms and workspaces that require it, without having to heat the entire volume of the pavilion which also acts as a thermo-acoustic cushion.

Despite their great importance, some of the interventions proposed in the project could not be fully realized in this first phase. In order to make Faktoria visible and increase the spatial quality of the surroundings, the project provided for the dematerialization of the pavilion envelope using polycarbonate panels and new glazing and increasing its permeability by means of large sliding panels. on both sides. In this way, indoor activities would be extended to adjacent areas, colonized by the Parkez system, a modular sidewalk extension system designed and developed by behark studio. The project also envisaged transforming the south cantilevered brise-soleil into a sunny outdoor terrace for the employees of the cooperative.

Although these actions have been postponed to later stages, due to funding problems, Aiaraldea Ekintzen Faktoria is a living project and in continuous development, and many works are still in progress, such as the manufacture of specially designed furniture. Faktoria was built to a large extent thanks to the community work of the partners themselves, from the design work of the architecture studio to the many guilds and professionals involved in the work, which is of great importance in fostering the feeling of belonging and promote the socio-cultural project that it represents. It is the demonstration of the latent transformation potential in any project developed with commitment and dedication, even in the face of very tight budgets. As an urban or industrial structure of organic growth, Faktoria extends inside the pavilion and will expand, to provide unexpected and enriching scenarios to the community that makes it possible.

Market situation This study assesses the impact of COVID-19 on business restriction, funding, and destabilization on business owners, financial supporters, and disruptors. While many countries and regions have taken containment measures in various ways, the impact is still varied across countries and locations. The short and long term effects of the company are being researched. […]

CHICAGO–(BUSINESS WIRE)–February 16, 2022– NOCD, the world’s leading provider of Obsessive Compulsive Disorder (“OCD”) treatment, has chosen Violet as a partner to enhance NOCD’s current therapist training programs. Violet is an innovative company that has standardized how to measure a provider’s cultural competence, compares them, and then offers curated pathways to improve a clinical team’s […]

Homepage ” General” Cultural Heritage Preservation Workshop Posted by: January 14, 2022 Download logoA workshop focusing on the preservation of cultural heritage organized by the Department of Culture and Sports of the Central Region was organized on January 13 and 14 at the Asmara City Hall under the theme “Preserving cultural heritage through coordinated management […]